Happy 75th Birthday to Sally Field, who first appeared on TV in Gidget and The Flying Nun). While playing a feisty mill worker in Norma Rae, for which she won an Oscar, she fought so hard in one scene that she actually broke the rib of an actor playing one of the cops. Upon accepting the best actress award, she exclaimed in a memorable speech, “I can’t deny the fact that you like me. Right now, you like me.” 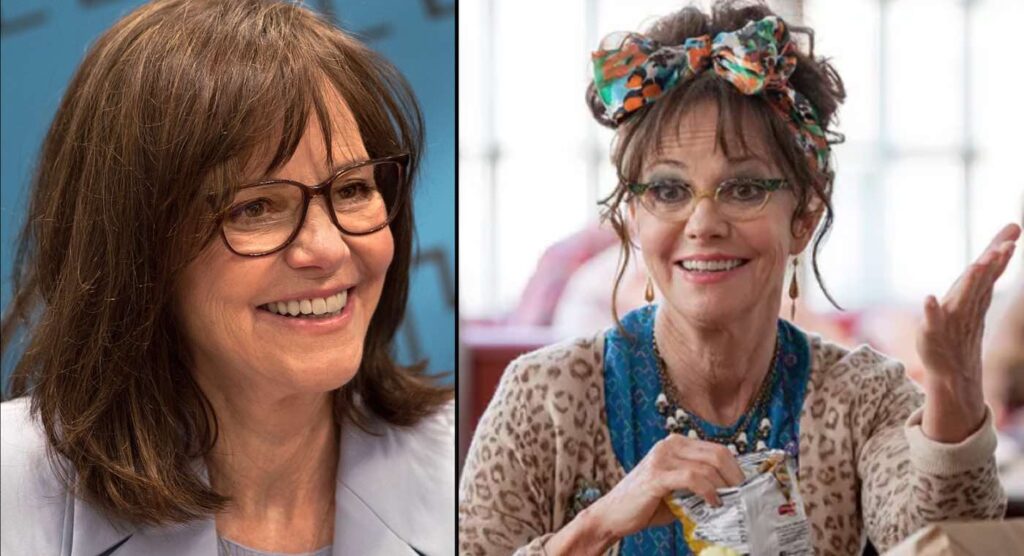 She won her second Academy Award for Places in the Heart—and also added 3 Emmys, 2 Golden Globes, a Screen Actors Guild, and a Tony nomination to her resume.

Her movie career escalated during the 1970s with Smokey and the Bandit, and she co-starred in the hits Mrs. Doubtfire and Forrest Gump in the 90s.

In 2015, she portrayed an eccentric 60-year-old (above) who becomes infatuated by a young coworker in Hello, My Name Is Doris, for which she was nominated for a Critics’ Choice Award.

She wrote a 2018 memoir, In Pieces, and said, “Seventy is old and that’s OK. I’ve gathered strength behind my years. I have value that doesn’t come when you’re 50 or 40 or 30 or 20. It doesn’t come until you’ve been in that saddle for a number of years.” WATCH a interview with AARP about aging below… (1946)

More Good News on this Date:

Happy 33rd Birthday to the wonderful Emma Stone, an Oscar-winning actress who first gained popularity in Superbad, but went on to impress audiences in The Amazing Spider-Man, The Help, Birdman, and La La Land.

The gifted singer and jokester born in Scottsdale, Arizona has donated time and money to autism and breast cancer awareness, and supports fellow actors in need of financial assistance. (1988)

Also, 167 years ago today, John Philip Sousa, the father of the marching band who wrote Stars and Stripes Forever, was born. He was the U.S. Marine Band leader under five presidents, and invented the sousaphone, after realizing the bass sound from the tuba was being lost because the sound coming out of the instrument went skyward, instead of being directed toward the audience. (1854)

Happy Birthday to the actor, writer, director-producer Ethan Hawke, who was born in Austin, Texas, 51 years ago today.

After his breakthrough performance in the 1989 drama Dead Poets Society, he went on to act in 80 films and win nominations for a Tony Award (for The Coast of Utopia) and four Oscars—two each for Best Adapted Screenplay (Before Sunset and Before Midnight) and two for Best Supporting Actor (Training Day, which co-starred Denzel Washington, and Boyhood).

Hawke has also directed three feature films, three off-Broadway plays, and a documentary—and is the author of two novels, a fable called Rules for a Knight, and a graphic novel.

Last year, he sported a very long, shaggy beard playing the abolitionist outlaw John Brown, in The Good Lord Bird, a self-produced 7-part Showtime series. He also joined his real-life daughter Maya (from his former marriage to Uma Thurman), in a romantic comedy film last year, Revolver, playing a father-daughter pair in the 1960s, when the Beatles-obsessed girl schemes to become a couple with George Harrison.  WATCH Hawke’s talk during lockdown last year, Give Yourself Permission to Be Creative… (1970)