133 years ago today, a group of 33 academics, businessmen, and others met at the Cosmos Club in the nation’s capital with the aim of creating an organization to “to increase and diffuse geographic knowledge.” Thusly, the National Geographic Society was born, and over the next one-and-a-third century, would become one of the world’s largest scientific, cultural, and educational institutions. For decades the society has sponsored intrepid scientific and exploratory missions across the globe, including one man’s walk to document an on-foot circumnavigation of the planet, the first video footage shot from the summit of Everest, and the 1948 Arnhem Land Expedition. LEARN more about their contributions to our society… (1887

9 months after it was founded it would go on the publish the first edition of the society’s new journal—National Geographic Magazine in 1888, and it was then they settled on their trademark yellow boundary. There are 12 monthly issues of National Geographic per year. It’s currently published in 40 local-language editions in many countries around the world totaling 6.8 million monthly and some 60 million readers. With a notable penchant for photography, National Geographic Magazine was always on the cutting edge of the science, deploying flash, underwater color, and high speed photographies, often before anyone else in media.

It was already seen as an established and prestigious organization early in its life. The picture above includes the discoverers of the North Pole (4), South Pole (3), Machu Picchu (16), as well as Alexander Graham Bell the inventor of the telephone (7), and many members of various international delegations in Washington.

Its Committee for Research and Exploration has awarded more than 11,000 grants for scientific research and exploration to date, including partnering with Yale to financing the discovery, research and publication of the findings of Machu Picchu from 1909 to 1915. The society maintains a museum in Washington D.C. which hosts exhibits from some of the most important archeological finds, such as the tomb of King Tut, and the Staffordshire Hoard.

WATCH the video chronology the early years of the society, the iconic individuals who’ve enjoyed its support, and its penchant for stunning images.

And, Happy 56th Birthday to Patrick Dempsey, the actor who became popular for his role as Dr. “McDreamy,” on Grey’s Anatomy. He raises millions for cancer patients with his annual 50-mile bike ride, The Dempsey Challenge in Maine, to honor his mother, who died of the disease. His Dempsey Center for Cancer, Hope and Healing provides free support, education and wellness services to cancer patients, survivors and caregivers. (1966)

112 years ago today, public radio broadcasting was born in the United States when American inventor Lee de Forest used his new vacuum tubes to receive the transmission of a live Metropolitan Opera House performance in New York City, starring the famed singer Enrico Caruso. He was afterward dubbed The Father of Radio. 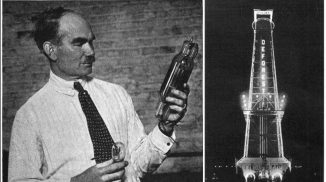 Owner of 180 patents, de Forest’s most famous invention was the three-element “Audion” (triode) vacuum tube, the first practical amplification device. It was the foundation of the field of electronics, making possible not only radio broadcasting, but long distance telephone lines, and talking motion pictures. (1910) 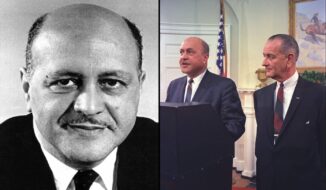 56 years ago today, Robert Clifton Weaver, a career civil servant with a doctorate from Harvard, became the first African-American to be appointed to a US cabinet-level position.

He became the first ever Secretary of Housing and Urban Development (HUD)—a new agency established in 1965 under President Johnson. (1966)

And, on this day in 1968, Johnny Cash recorded his landmark album At Folsom Prison, playing before 2,000 inmates in California. For 13 years, since recording his song Folsom Prison Blues (which was inspired by a film’s depiction of incarceration), Cash had been interested in performing behind bars.

His drug abuse problems were under control and he was looking to turn his career around, so, backed by June Carter, Carl Perkins and the Tennessee Three, he recorded the first of several shows inside prisons. The LP was a huge success—achieving platinum status and reaching number 15 on the national album charts. HEAR a song LIVE…